Why Do Cats and Dogs Eat Grass?

Why Do Cats and Dogs Eat Grass?

Many people ask why their cat or dog goes out and eats grass, only to later vomit. I too often have wondered and have heard the various theories. Here are some of the common explanations and my thoughts on them:

Dogs and cats eat grass because they have a nutritional deficiency. Cats and dogs are carnivores—defined as meat eaters. Wild cats and dogs kill other animals (usually herbivores—defined as vegetable eaters), and eat the meat. Knowing this, millions of dollars of research has been done on pet nutrition. The commercial foods developed, purchased and fed to pets appear to contain the essential and trace nutrients required, and our pets are living longer than ever. This theory does not seem to hold up to scrutiny.

Grass acts as a bulk agent and helps to purge parasites. This theory is not very plausible since other bulky foods do not purge parasites, and grass has no known toxin to disrupt the life cycle of common parasites. How would pets know they have a parasite? Plus, pets that have no parasites also eat grass.

Pets eat something bad and they need to vomit to purge themselves, so that’s why they eat grass. The idea that when a pet has an upset stomach, they feel the need to eat something (to stimulate vomiting) in order to rid the offending substance, is not valid. From my experience, whenever I eat something bad, I never have to eat anything to create nausea—I was nauseous already! I don’t think this theory is very plausible.

This leads us to the next question. Does that make our pets silly like us, or us silly like them? I’ll let you be the judge of that! 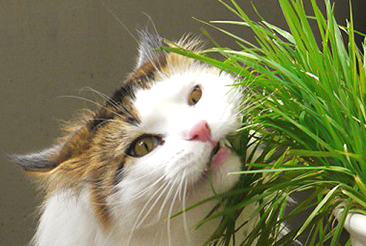